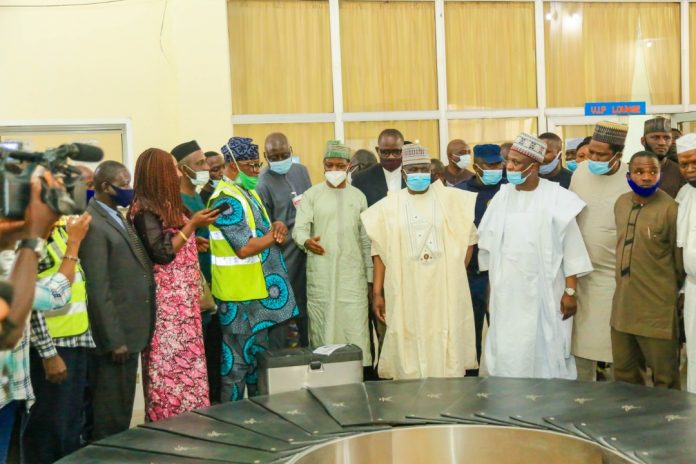 The Executive Secretary of the Nigeria Christian Pilgrim Commission Rev Yakubu Pam recently undertook an inspection tour of facilities at the Yakubu Gowon Airport, Jos preparatory for the 2020 General Pilgrimage exercise to Israel.

The NCPC Chief Executive was conducted round the facilities at the airport by the Airport Manager,Mr Ayinla Olufemi
Rev Pam inspected facilities at the departure hall which still need some finishing touches such as furniture and lighting system

The NCPC helmsman and his entourage also inspected the airport clinic where the intending Pilgrims will undergo medical check up.before boarding. He was also shown. the conveyor belt where the passengers luggages will pass through which had been installed and ready to commence work as soon as it is powered.

At the end of the inspection tour, the No 1Christian Pilgrim Officer of the Federation stated succinctly, ” I am quite satisfied with what my eyes have seen” . He added,” we will no longer travel to Abuja to fly, we will take our Pilgrims direct to Israel from this Airport”, he said.
Speaking at the event, the Secretary to the Government of the State , Prof Danladi Auta said that the Executive Governor of Plateau State, RT.Hon. Simon Lalong had been driving the process of up grading the airport and had done a lot of follow up in that regard..He assured that the Government of Plateau State would do its best to ensure that the challenges confronting the airport would be addressed despite the paucity of funds to enable intending Pilgrims to be airlifted from the airport.
He disclosed that the State government would do everything possible to ensure that there would be international flights from the Airport in not too distant time.
Also speaking, the Airport Manager, Mr Ayinla Olufemi revealed that there were few challenges at the airport but was delighted that the state government had promised to address them such as the provision of scanning machines.
It would be recalled that the Commission commenced the inspection of designated Airports across the country for this year’s Pilgrimage in early November,; the Yakubu Gowon Airport is the ninth to be inspected so far by the Commission.
Dignitaries at the inspection tour with the Executive Secretary included the NCPC Directors of Finance and Accounts, Mr Joseph Oche, Sir Peter Okuleigbe, NCPC Director of Administration ,Mr Barnabas Ali , Director Operations NCPC Rev Amos Yohanna, the plateau State Commissioner of Housing, Barr Bitrus Zulfa, the Transport Commissioner Mohammed Abubakar and Christian leaders.