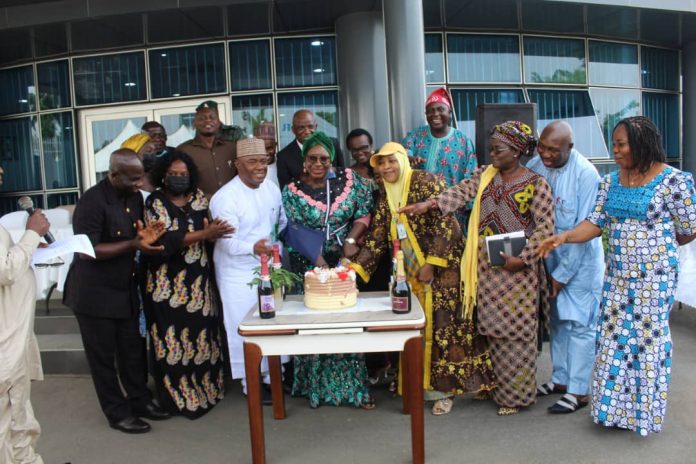 The Honourable Minister of Women Affairs, Dame Pauline Tallen, OFR, KSG who has been on medical vacation following a treatment offshore in Italy arrived the Ministry’s headquarters to a tumultuous special welcome-back reception by the Management and Staff led by the Permanent Secretary, Engr. Olufunso Adebiyi, FNSE, on Monday, 22nd November, 2021.

The reception organized at a very short notice by the Director, Human Resources Management, Mrs. Funke Osunkoya and the Staff Union, the Association of Senior Civil Servants of Nigeria (ASCSN) who sought the permission of the Permanent Secretary for the short event was to demonstrate affection of Management and Staff for Dame Tallen, “to show her that her leadership of the Ministry at this time, is very well appreciated” as the few speakers at the short reception surmised.

Even though notice to the rest of the staff was short, it was very easy to quickly mobilize them even as they were supposed to be coming back to work on Monday morning because of the high regard which majority, if not all, the Staff of the Ministry have for their consummate political head and great advocate of issues that affect the Nigerian women, children and the vulnerable persons.

The Permanent Secretary, Engr. Olufunso Adebiyi, FNSE told the staff that it is delightful news that Dame Tallen survived the special surgery to restore her health at her mature age and even when she has to lay-off work for a long while afterwards.

He expressed gratitude to God for bringing the Honourable Minister back to her bubbling and energetic self and to see the Ministry running and gaining momentum which he attributed to “the dynamic leadership provided for the Ministry by Dame Tallen.”

Adebiyi reeled out a list of progresses recorded during the Honourable Minister’s brief absence, notable amongst which are that the Ministry engaged with the Development Partners of the Ministry at a retreat in Lagos from 11th to 22nd October, on how best to achieve coordination with the various interventions on women, children and the vulnerable persons in Nigeria; that the Ministry has been engaging repeatedly with Development Partners to plan for a successful 2021 edition of the 16-Days of Activism against Gender-Based Violence (GBV) which will run from Thursday, 25th November, through to 10th of December, 2021;

Engr. Adebiyi further apprised the returning Honourable Minister that various capacity building programmes for Staff done in conjunction with some Development Partners of the Ministry were being carried out for Staff in batches as he disclosed that some Staff are still at training in the Ministry’s Conference Room even as the special reception was on-going.

The Permanent Secretary added that the women empowerment materials and equipment which the Honourable Minister ordered for, have been moved to the various States across the Geo-political Zones of the Country as directed, ready for distribution just as the Ministry defended her Budget proposal for the 2022 Fiscal Year at the Senate.

The Chairman, ASCSN, Federal Ministry of Women Affairs Chapter, Adekunle Balogun Ashir who spoke on behalf of the Staff expressed gratitude to God for restoring the health of the Minister which he said, he loves to affectionately called “Mother”.

Dame Pauline Tallen who has been wearing an arm-sling and having to endure some little discomforts disclosed to the delight and applause of her Ministry’s Management and Staff that she is getting back to full recovery and joy-filled to be returning to their warm embrace.

The Minister expressed delight at seeing them working very hard at the mandates of the Ministry in full cooperation with the Permanent Secretary, Engr. Adebiyi whom she specially commended for his inspiring leadership for the Directors and staff even while she was away.

Dame Tallen showered blessings of prayers on her staff in a return appreciation for the love shown her and for the special reception.
Highlight of the reception event was the cutting of the cake which was moderated by the Director, Press and Public Relations of the Ministry, Mr. Olujimi Oyetomi.

A salute to Senate President, Ahmad Ibrahim Lawan at 63