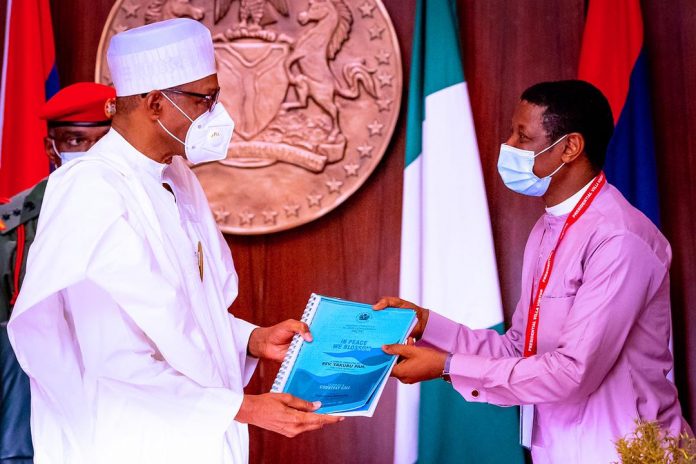 The Executive Secretary of the Nigeria Christian Pilgrim Commission NCPC, Rev. Yakubu Pam led a high powered delegation on a courtesy visit to President Muhammadu Buhari on Thursday 14th January, 2021 at the Presidential Villa, Abuja, where he briefed him on his peace building engagements across the country.
The NCPC boss, Rev. Yakubu Pam acknowledged the fact that Mr. President in his appointment as the Executive Secretary of NCPC encouraged him to combine his duties with his passion in the area of peace building.
Consequently, he said, “today I am very privilege to stand before Mr. President to give a brief account of what has been done in this report since assuming duties in the Nigeria Christian Pilgrim Commission in July, 2020, I have taken steps to entrench Peace building as a component of my work in the Commission’’. He informed Mr. President that a Peace Building Desk has been created in the Commission.
Rev. Pam intimated Mr. President that awareness creation was critical to achieving an enduring peace building in the country and so he was able to lay this as a proper foundation by calling on all Nigerians to embrace Peace.
The NCPC boss highlighted some of his actual Peace building activities so far in a paper to Mr. President titled. “In Peace We Blossom”.
He recalled his 3-Day Peace Summit on Southern Kaduna which was aimed at de-escalating the rising violence in that part of the country
He affirmed that a major resolution at the Kaduna Summit was that all stakeholders should take the task of Building Peace as their collective responsibility and not to depend wholly on Government to create peace.
He equally briefed Mr. President on his Peace Building efforts in Plateau, Benue, Taraba and Nasarawa State.
The Peace Ambassador further briefed Mr. President on his Peace building efforts with Religious leaders as a way of reducing ill-feelings in the Church towards activities of government. To this effect, he stated that a Peace Summit involving all high hierarchies in the Church was being proposed. He added, “As a component of the Peace Summit, A Prayer Summit will be Held to douse mounting pressures within the polity in Nigeria”.
He informed Mr. President that about 50 eminent Church leaders attended the meeting with religious leaders in Lagos and that such meeting would be replicated in South – East and South-South Zones this year.
Rev. Pam also informed the No.1 Citizen of Nigeria that he also met with the National Youth Council of Nigeria and Ethic Youth Leaders in order to have their support to achieve peace nationally. According to the NCPC Chief Executive, “We will not rest on our oars until we reach our desired goals”
The NCPC boss commended Mr. President’s vision on Peace Building. He thanked him for the confidence reposed on him to drive the peace building initiatives.
He equally thanked the Secretary to the Government of the Federation Mr. Boss Mustapha for his unalloyed support since he assumed office as the Executive Secretary of NCPC
Responding, President Muhammadu Buhari thanked the NCPC boss and congratulated him for the feats he had achieved so far in the area of peace building. He assured him that NCPC would receive all the cooperation needed from the Presidency for it to succeed in its peace building tasks and other responsibilities.
He added that both the Secretary to the Government of the Federation and the Vice President would give listening ears to the Executive Secretary.
The President however appealed for understanding from Nigerians as Government’s resources are so limited now.
He explained that in spite of the dwindling economic situation in the country, the Federal Government would still continue to provide the basic infrastructures as expected from any responsible government.
President Buhari admonished the NCPC boss to liaise closely with the Secretary to the Government of the Federation, the Chief of Staff to Mr. President, the Hon. Minister of Interior as well as his Police Affairs Counterpart to address some of the burning issues in his quest to building lasting peace in different parts of the country.

CAN Congratulates Okonjo-Iweala Over WTO Appointment