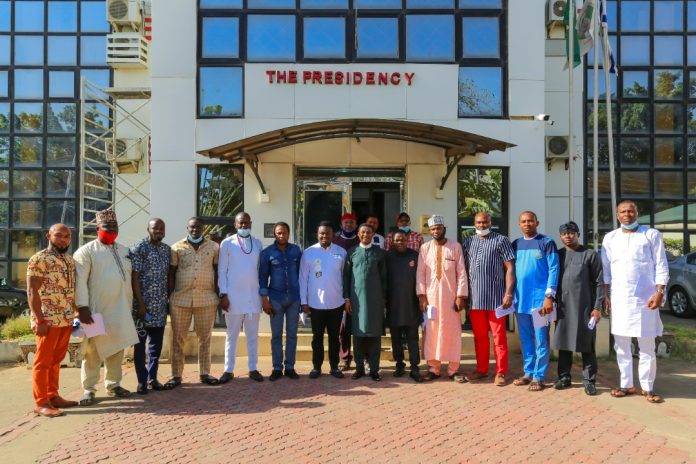 The Executive Secretary of the Nigeria Christian Pilgrim Commission Rev Yakubu Pam has thrown his weight for a National Youth Peace Confab to be convene by the National Youth Council of Nigeria NYCN and the Coalition of Ethnic Youth Leaders of Nigeria CEYLON.The NCPC boss disclosed this in his office in Abuja during a Press conference by the two apex Youth Bodies in Nigeria.

Rev Pam who was delighted with the way the umbrella youth bodies conducted and organised themselves to chart a new course for youth engagement, stressing that with the calibre of youths championship for a National Peace Confab, he had no choice but to support the cause of the youth .The Peace Ambassador described them as very credible leaders among young Nigerians.

According to the NCPC Chief Executive,” I agree with you in totality with what you have said today, not just your complaints, but you have a clear cut direction of what you want to achieve”.

He stressed that violence would never solve any problem, hence he was happy that the youths want to come together to discuss. He averred that Nigeria could only be built by Nigerians; the only strong black country in the world.

He promised to channel their request to the government and other well meaning Nigerians that could be of help in facilitating the National Peace Confab.He further reiterated that the only way to find a lasting solution to our present situation in the country would be to have a dialogue which would bring everyone together.

Rev Pam commended the President of the Nigeria Youth Council of Nigeria for his inclusive and credible leadership.

He admonished them to stay away from politics and avoid violence and other social vices.

In his address, the President of the Nigeria Youth Council of Nigeria,Amb.Sukubo Sukubo stated that the leadership of the NYCN concluded that there was a critical need to urgently convoke a youth peace Confab to consolidate on the positive outcome of the recent youth led public unrest that pervaded the country under the nomenclature of #EndSARS protests; and also consolidate on the healing process that had recently been activated.

He extolled the sterling leadership qualities of the NCPC boss which according to him had shown genuine interest in the affairs of the youth and young people. He further explained that the pedigree of the NCPC boss in peace building speaks volume of his capacity to handle  issues affecting the youth.

The President hinted that the National Peace Confab would hold in the first quarter of next  year.

CAN Congratulates Okonjo-Iweala Over WTO Appointment