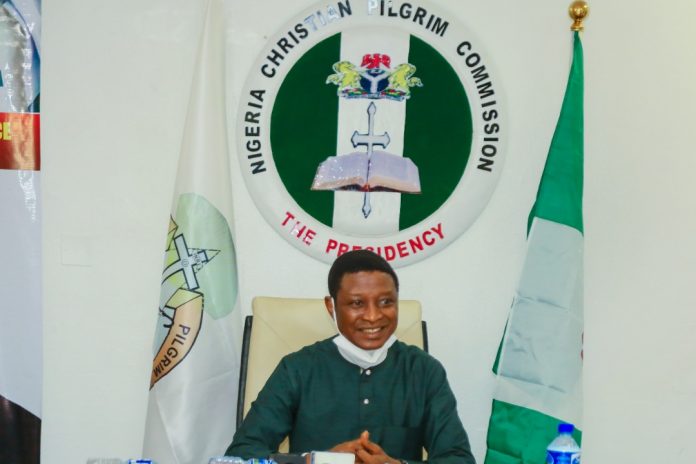 The Executive Secretary of the Nigeria Christian Pilgrim Commission NCPC, Rev Yakubu Pam has stressed the need for the Media to promote Peace in their reportage.
He disclosed this on Sunday, 23rd June ,2021 in Jos during a Thanksgiving Service organised by the Correspondent Chapel of the Nigeria Union of Journalists, Plateau State chapter, held at the Church of Christ In Nations, COCIN, Wholshe, Jos.
The NCPC Chief Executive who was the guest preacher at the thanksgiving service affirmed that the country was facing different threats to peace such as insecurity, kidnapping and all form of criminalities.He added that the issue of agitations by various ethnic nationalities, sensational headlines by the media, hate speeches and unguided reports in the social Media are all threats to the peace of the nation.
The Executive Secretary preached on ” the role of the Media and peace building: the Biblical perspective”
The guest speaker likened the role of a preacher of the gospel with that of a Journalist as both are enjoined to preach peace in their service to God and humanity.
The NCPC boss took his Biblical references from Isaiah Chapter 52 verse7, Psalm 68 verse11, Songs of Solomon, Chapter 2 verse 8, Mark Chapter 13 verse10, Romans chapter 10 verse 15 and Ephesians Chapter 6 verse16. The Lord spoke variously on the importance of publishing and preaching peace through what we say as preachers and what we write as Journalists.
He frowned at the way and manner the social media operates which goes against the ethics of Journalism practice.
Rev Pam commended the Media in Plateau State for their professionalism and balanced analytical reportage. He gave them a thump up for doing well .
He admonished the Journalists to be careful of what they report and the religious leaders too should be careful of what they preach.
He cautioned that we are in a perilous time and should be circumspect not to use our callings to disrupt peace in the society .
In his charge,the COCIN President, Rev. Dr.Dachollom Datiri, represented by the Deputy General Secretary of COCIN, Rev. Dauda Jimra said journalism is a sure weapon to change the world. He enjoined them not to be silent at a time like this .
According to him,” Be the Esther of our time and use your profession to change the world”.He further stated, ” be strong and be courageous even at the point of death” .
In his remarks, the Chairman of the Correspondent Chapel, NUJ Plateau State, Mr Gyang Bere, thanked God for his mercies and faithfulness in the lives of the members of the Chapel.
He explained that they had to thank God for the lives of nine of their late colleagues who died in auto crash in 2005 in the line of duty and the lives of their colleagues who survived the fatal accident.
He said the Chapel under his leadership was inaugurated in July last year, but has been able to make an indelible mark within one year of service.
The highlight of the thanksgiving service was the dedication of a brand new car for the Correspondents’ Chapel which the NCPC boss , Rev Yakubu Pam prayed for the car .
It would be recalled that the Correspondent Chapel officially commenced their Programme on 20th May in Jos with a maiden training workshop for their members titled,” the role of ICT in promoting peace Journalism in Nigeria”.
The workshop was chaired by the Hon Commissioner for local Government and Chieftaincy Affairs, Plateau State, Mr Sylvanus Tapgun.