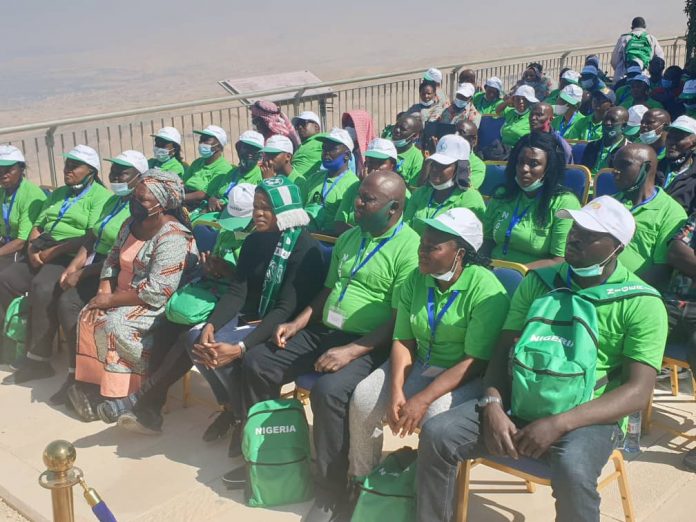 The Nigeria Christian Pilgrim Commission, NCPC held its maiden Prayer Congress on 29th July ,2020 at Mount Nebo, Jordan. The Prayer Congress was the first to be held in Jordan for the 2020 Pilgrimage exercise.

All the Nigerian Pilgrims currently in Jordan were on ground to grace the epoch making event.
The Executive Secretary of the Nigeria Christian Pilgrim Commission, Rev Yakubu Pam in his welcome address, expressed his profound gratitude to the Jordanian authority. He specially thanked them for the wonderful reception which was accorded to the NCPC delegation on arrival in Jordan. According to him,” this will forever be appreciated”.

He hinted that the Commission had discovered quite a number of Holy Sites in Jordan and would take the good news back home for a sustained relationship with Jordan.
The NCPC boss promised to leverage on this new relationship with Jordan in the area of Agriculture, tourism and ICT for the benefit of our youth.
Rev Pam further commended the Jordanian government for opening their doors to Nigerian Pilgrims at a “perilous time like this”.

He thanked the Nigerian Ambassador to the Kingdom of Jordan, His Excellency, Amb.FarukYabo for making sure that the Pilgrims and members of the delegation are comfortable in Jordan.His words”,
thank you for making Jordan a home away from home”
The NCPC helmsman in his charge, affirmed that there would be peace in Nigeria after this Pilgrimage.He posited that peace and development without love , cannot guarantee peace in Nigeria.

Rev Pam who took his Bible lesson from the book of Psalms, chapter 23 verse one called on Christians to be still in the face of trouble so that the Lord who is a good Shepherd would see them through and deliver them from all their travails.
He admonished them to learn how to forgive one another as Christ would always forgive us.
The Chief Executive of NCPC later created four think tank groups from amongst the Pilgrims to provide advisory services and policy direction in the area of Agriculture, tourism,ICT , policy formulation and spirituality.

Speaking, the Nigerian Ambassador to the Kingdom of Jordan, His Excellency, Amb. Faruk Yabo said he was excited for the opportunity to receive the Nigerian delegation to Jordan.
He stated that Jordan had been able to discover incredible Holy Sites which means that Pilgrims would have the opportunity to visit more Holy Sites in Jordan.
He appreciated the dynamic and pragmatic leadership of the NCPC boss for making sure that Jordan Pilgrimage became a reality.

He stressed that Jordan had been spectacular in achieving peace and unity as such “is an excellent example of peace and unity.”
He affirmed that there exist a strong bilateral relationship between Nigeria and Jordan.He further expatiated that Nigeria would continue to appreciate what Jordan had been doing in the area of counter terrorism and military cooperation.
Amb.Yabo was optimistic that the Christian Pilgrimage operation in Jordan would be sustained.
He intimated that the Nigerian Embassy under his leadership had developed a mobile application for Nigerians in Jordan to enhance effective information technology drive.
In his sermon,the President of the Christian Association of Nigeria, CAN,His Eminence, Dr Samson Ayokunle preached on love as symbolised by Christ.
Reading from the book of Acts chapter17, Collosians 13 verse 14 and Romans chapter 12 verses 1 to 12.

He affirmed that the spiritual experience of the people cannot stop. He posited that without Jordan the Israelites would not have been able to reach the promised land.
Dr Ayokunle thanked the Ambassador for allowing himself to be used to be part of this historic moment. His words,” We thank you because you can read the minds of God and acted well,” He added,”the Ambassador also opened his full hands to receive Nigerian Pilgrims even when he belongs to another faith.”
He explained that because of this Pilgrimage experience in Jordan, Nigerians would know and appreciate Jordan better.
The N o 1 Christian leader in Nigeria further stressed that true love overcomes everything and we should be devoted to one another in love .
Prayers were offered for Nigeria, the state governors, pilgrims and Jordan.